A Brief History of the Microscopy Society of America

For its first 50 years, our Society was devoted to the electron microscope. For those interested in more details, the best source is Sterling Newberry's book EMSA and its People — the First Fifty Years. This book was published in 1992 by the Electron Microscopy Society of America, and given to each attendee of the 1992 Annual Meeting in Boston. A few copies are still available from large booksellers.

Overcoming the limitations of the light microscope was especially important for biological studies, which was the major use of the electron microscope (EM) after its invention in 1931-2 by Ruska and Knoll. An excellent book on the development of biological EM in the USA is Picture Control — The Electron Microscope and the Transformation of Biology in America, 1940-1960 by Nicolas Rasmussen (Stanford University Press).

Today, tremendous advances in light microscopic methods have shifted many biological applications away from EM, while the importance of EM in nanotechnology and materials science has steadily grown over the last twenty years. As a result, EM applications are now rather evenly balanced between biological and materials applications. MSA has become more diverse, going beyond EM to encompass the full range of microscopic and analytical techniques, and providing a home for microscopists in all fields of study. 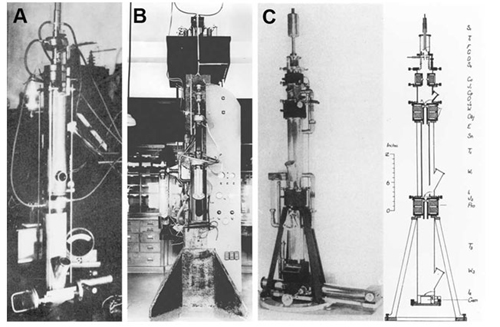 An electrostatic emission electron microscope, using a standard cathode ray tube, was demonstrated in 1934 at the University of Toronto by Walter Kohl, a visiting lecturer from Germany. This was likely the first example of electron microscopy of any kind in North America.

The first transmission EM constructed outside Germany was completed in 1935 or 1936 by Paul Anderson and Kenneth Fitzsimmons of Washington State University, Pullman, WA (Fig. 1A). In the same year, Gordon H. Scott at the Medical School of Washington University in St. Louis started an EM program, with an emission EM in 1935, and a transmission EM in 1939, constructed by Sterling Newberry (Fig. 1B). Neither of these programs continued, however, and resolution did not exceed that of the light microscope.

Also in 1935, E.F. Burton established an EM program at the University of Toronto, starting with a first instrument constructed by Cecil Hall, followed by the construction by James Hillier and Albert Prebus in 1938 of the first high-resolution EM in North America (Fig. 1C).

Hillier and Prebus were succeeded by William Ladd and John H.L. Watson, who refined the EM to yield a resolution of better than 10 nm in 1939, matching the performance of the German EMs at the time.

Hillier was subsequently hired by Alexander Zworykin (a pioneer in the development of television), and went on design highly successful electron microscopes for RCA, eventually becoming overall head of research at RCA.

The Founding of the Society 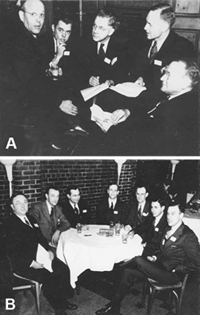 The first meeting of electron microscopists in North America took place on November of 1942 at the Sherman Hotel in Chicago (Fig. 2). It was organized by G. L. Clark of the University of Chicago, chairman of the American Chemical Society's Division of Analytical Chemistry, and took place concurrently with the National Chemical Exposition. All known electron microscopists were invited, and about 60 people attended. RCA set up an EMB microscope at the hotel for the meeting. No formal papers were presented. The agenda was heavily weighted towards descriptions and operation of electron microscopes, and methods of specimen preparation. A temporary slate of officers was elected:

During 1943, the officers met twice, and a survey and application forms were mailed out. The by-laws were written by A. F. Prebus and O. S. Duffendack. The dues fee for Charter members was $5 (two Charter Members are still with us, Sterling Newberry and Joseph Comer). Via the survey, the membership voted on the name of the Society, and approved the affiliations with the American Association for the Advancement of Science and the American Institute of Physics. The design of the first logo was approved (Fig. 3) 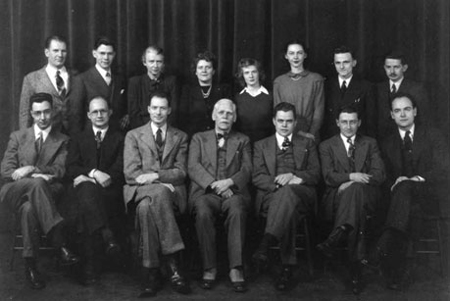 The 1950 meeting was at the Statler Hotel, Detroit, September 14-16 (Fig. 6). At this meeting, president Wycoff suggested that the Society should be disbanded. His rationale was that the Society had been formed as an association of people involved in the development of the electron microscope, and he felt that by this time the interest was more in applications than instrument development. Nevertheless, yearly meetings continued (Fig. 7). Eventually, in 1964, this change was reflected in a name change from Electron Microscope Society to Electron Microscopy Society (Fig. 8). A major source of strength of the Society has always been the cross-discipline nature of the applications of microscopy, not only the development of the instrument itself. 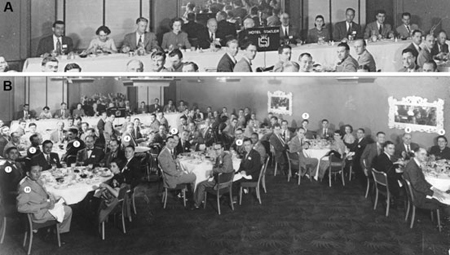 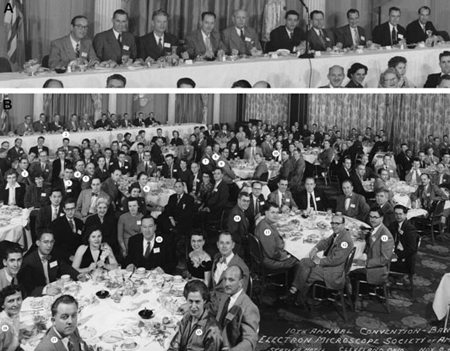 For the 1949 meeting, EMSA invited representatives of European microscopy societies, and was encouraged to start an informal association of worldwide societies. Eventually, this was reflected in The International Federation of Societies for Electron Microscopy (IFSEM), which EMSA joined in 1956.

The 25th anniversary meeting was held at the Sheraton Hotel, Chicago, August 29 - September 1, 1967. Presided over by Charter Member Joseph Comer, the meeting was marked by special symposia summarizing the state of the art in the various applications of electron microscopy:

Electron Microscopy in the Future

The first joint EMSA-IFSEM meeting (ICEM-9) was held at the University of Toronto, August 1-9, 1978, on the 40th anniversary of the first successful electron microscope in North America (Fig. 9). Special honorary degrees from the University, the birthplace of that microscope, were presented to these pioneers of electron microscopy. A joint EMSA-IFSEM meeting was again held in 1990, in Seattle.

The 50th anniversary EMSA meeting was held August 16-21, 1982, at the Hynes Convention Center in Boston (Fig 10). A highlight of this meeting was the attendance of as many of the Charter Members of EMSA, and as many of the Past Presidents, as possible, as well as other microscopy luminaries including Ernst Ruska. Video interviews with long-time members and other outstanding scientists were conducted during the preceding months, and a special 2-hour videotape was produced. In addition, a commemorative book "EMSA and its People: The First Fifty Years" was given to each registrant. Both the book and the interviews were the work of Sterling Newberry, himself a Charter Member, with the help of many others. 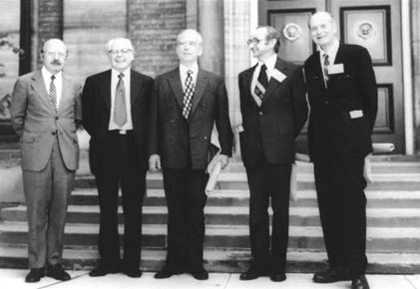 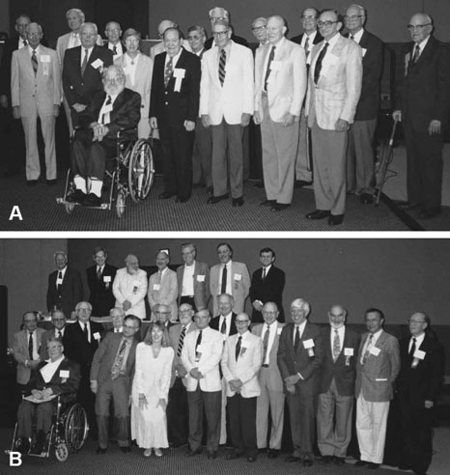 At the 2009 meeting in Richmond, VA, the Society's new face was unveiled, with a fourth change in the logo (Fig. 12). This represented a complete change in the professional management of the Society and its annual meetings, as well as the start of several new programs aiming to broaden interest in, and recognition of, the Society, reflecting the continuing increase in importance of microscopy and microanalysis across numerous disciplines.

The traditional function of the Society as a forum for those involved in cutting-edge development of instrumentation and techniques continues, but we now place a stronger emphasis on both basic and advanced education, by means of 1-day and 4-day courses, as well tutorial lectures and roundtable discussions. We plan to expand the educational resources on this website, as well.

In addition, we plan to expand our Certified EM Technologist program to include materials, as well as biological sciences, and we have a new mechanism to recognize a high level of achievement among our members as "Fellow of the Microscopy Society of America".